How do Raked Wingtips of an Airplane Work? 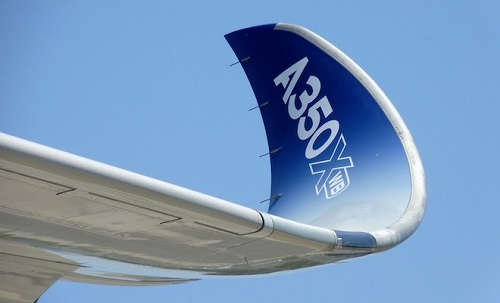 Air travel is often boring and gives us time to ponder on the tiny little things of nature. Airplane design has undergone many changes over the years to meet several civilian and military needs. The wings of an airplane are bound to the fuselage (body of the airplane that accommodates passengers) at one end and the other end, wing tip, is free. Boeing, in the design of Boeing-747 wing, has employed wingtip that is bent slightly upward, technically called raked wingtip, based on the computationally done fluid dynamic calculations. Although it may not make considerable change visually, this slight design change plays major role in effecting the ‘lift’ aircraft experiences. To understand how this works, let’s begin with physics behind the functioning of an aircraft and then get into our puzzle.

An aircraft’s wing is designed in such a way that the leading edge, the edge of the aircraft towards the nose, is round and trailing edge (the one that is towards the aircraft tail) is sharp. This design results in an increased velocity of the air above the wing compared to that of the velocity below. High velocity of air above the wing implies it’s a low-pressure region and lower velocity of air below the wing makes it high-pressure region. This difference in the air pressure below and above the wing creates a lift, upward force that enables aircraft to hover in the air. This is the same lift force that we encountered during our H2 Physics tuition classes on Circular Motion. In order to achieve moving air around the wing region an engine or a propeller is used to draw air, continuously, towards the wing. This fast movement of air across the wing and the pressure difference creates the lift.

With this knowledge let’s answer our question of why the raked wingtips help in attaining better lift and consequently help in saving fuel. Towards the entire wingspan there is low pressure above the wing and high pressure below. This pressure difference cannot be maintained at the wing tip, as it is the meeting point of low-pressure, high-pressure regions. At the tip of the wing, as we know air moves from high-pressure regions to low-pressure regions, the air from the bottom goes up. This movement of air is in the form of a vortex that hits back on the top of the wing. When the vortex hits on the wing-top there is force generated pulling the aircraft down. This downward force acting on the aircraft wing is not a desirable feature. In order to nullify this effect in Boeing-747, the wings are designed in such a way that the tip of the wing is bent slightly upwards. This design avoids wind from the bottom of the wing going all the way up and hitting the upper wing surface. Thus the downward force acting on the wing due to vortices formed at the tips is reduced. Thus Boeing has done a magnificent job just by making a simple change to the wing tip.