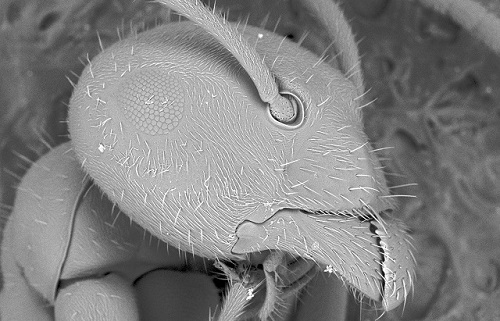 The glory of atomic force microscopy and its method of working were discussed in the last article. However there were questions unanswered. How does one detect tiny motion in the tip caused due to forces exerted by atoms on the tip?

This article focuses on these unanswered questions and takes you a little more closer to the science invoked in atomic force microscopy. The tip of an atomic force microscope is very small and the motion of it induced by atoms is also very small in magnitude. Imagine distances of the order of size of an atom, the motion induced is not too large compared with it. So the detection is a challenge and if we fail to detect these motions, the magnanimous machine serves no purpose. There are two methods, typically, employed to circumvent this problem. One, piezoelectricity and the second is using lasers.

Piezoelectricity is a property where certain materials generate electric current in response to applied pressure. The cantilever is constructed in such a way that the motion in it is associated with compression or decompression of a piezoelectric material. The tip, usually, moves upwards or downwards depending on the nature of force (attractive or repulsive) exerted by atoms or molecules being detected. The construction of the cantilever enables compression or decompression of piezoelectric material in response to the motion of the tip under attractive or repulsive forces mentioned above. This results in generation of current which is the signal of movement of the tip. This current is then amplified and the amplified signal is deciphered to obtain the landscape of the miniature world.

On the other hand, lasers are used for detection. A laser beam is reflected off the surface of cantilever. The reflected laser beam is detected using a photo diode light sensor. There is a change in the position of the reflected beam as a result of the motion in the tip. The change in the position of the beam is associated with change in intensity of the reflected beam at the sensor. This change in intensity tells us about the landscape of the miniature world (once again!). Similar to the scanning tunneling microscope we learnt during our Physics tuition lessons, a typical atomic force microscope tip scans the entire surface of the sample and detects bumps and pits on the surface. Its like taking a sonar equipment and measuring the landscape of the seabed which is full of underwater valleys and mountains. Hence the world landscape. The only difference is, although we call the device a microscope, here we are dealing with a nanoscopic world. AFMs are often used to study the sizes and texture of nano particles.